Testimonials from Our Clients

Some happy words from our clients and featuring our feline friends!
Cat Safety
Catification
Cat Behavioural

Our testimonial pages are progressively updated so do keep a look for updated testimonials in your next visit.

Alternatively, you may visit our social media pages to see the latest ones! 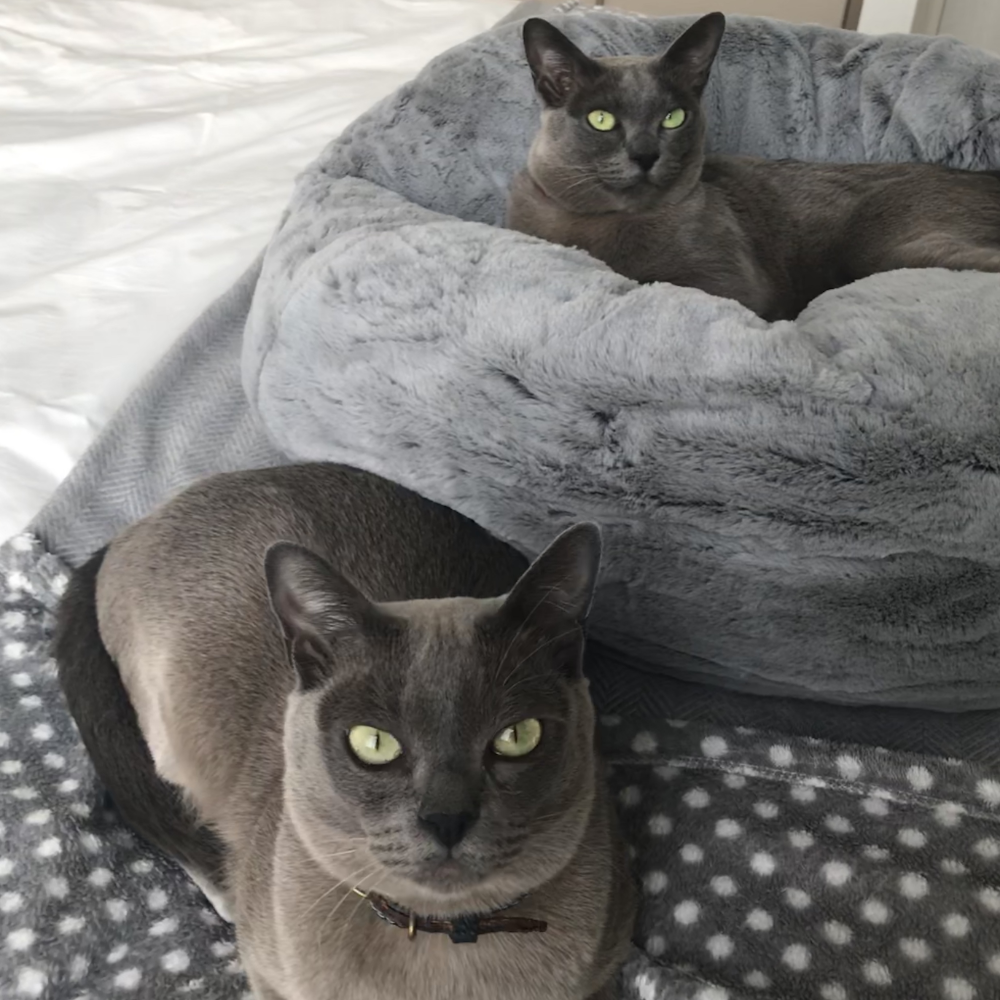 We employed (The Cat People) to help us to teach our new helper how to look after our two cats. Our helper had no previous experience in looking after pets so we wanted to help boost her confidence and also ensure our cats are happy and well looked after while we are out at work.

Although I am a vet myself, I felt (The Cat People) were better placed to teach as they have a very engaging manner and explains things in a simple and easy to understand way. They made the session very fun and entertaining – we covered everything from cat safety, to how best to play and interact with the cats, and even how to discipline them.

We all learnt something new, including myself and my husband. (The Cat People)’s knowledge of cats and cat behavior is outstanding, it is a real passion for her and I would trust her advice completely. The session was well worth our investment in time and money and we all really enjoyed focusing on the cats for a couple of hours! 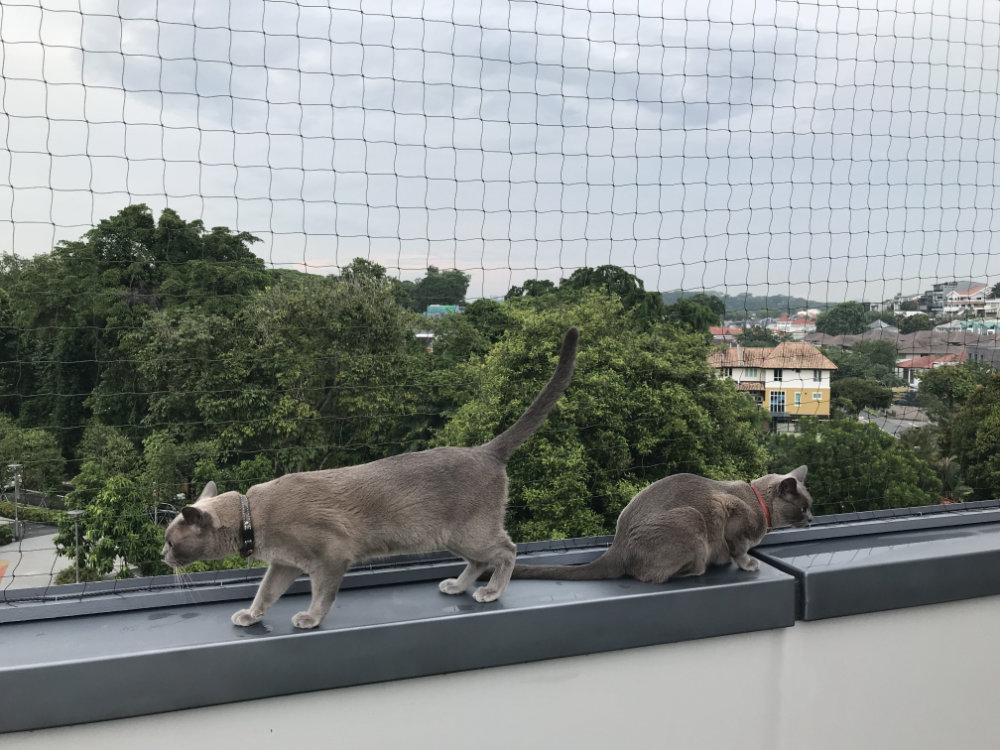 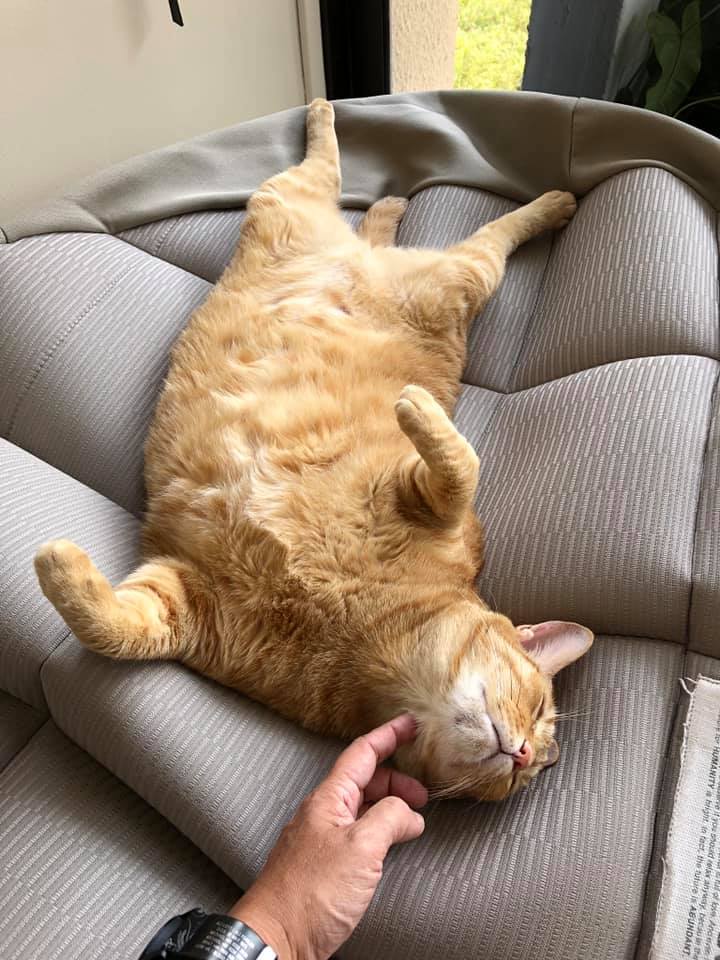 I first contacted Hélène for a behavioural consultation as one of my cats was becoming increasingly odd and unpredictable. She was incredibly thorough and patient with him and made some really insightful observations. She left us with a range of strategies to help, and some invaluable advice. It has made a world of difference and we cannot thank her enough. She noted that our balcony was not secure for our cats and so her team installed protective netting. They did an amazing job and we can sleep well at night knowing that the cats are 100% safe. And the cats are happy that they can be on the balcony whenever they like!
I cannot give higher praise for The Cat People, both for behavioural advice and also for the installation. The positive impact is priceless and we are eternally grateful. 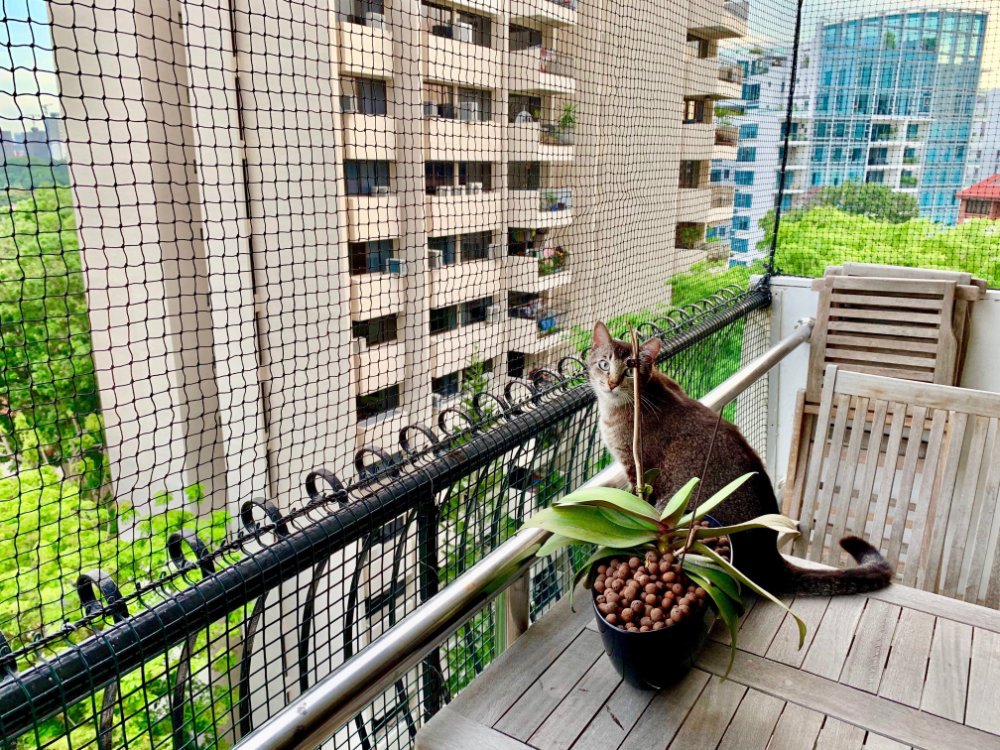 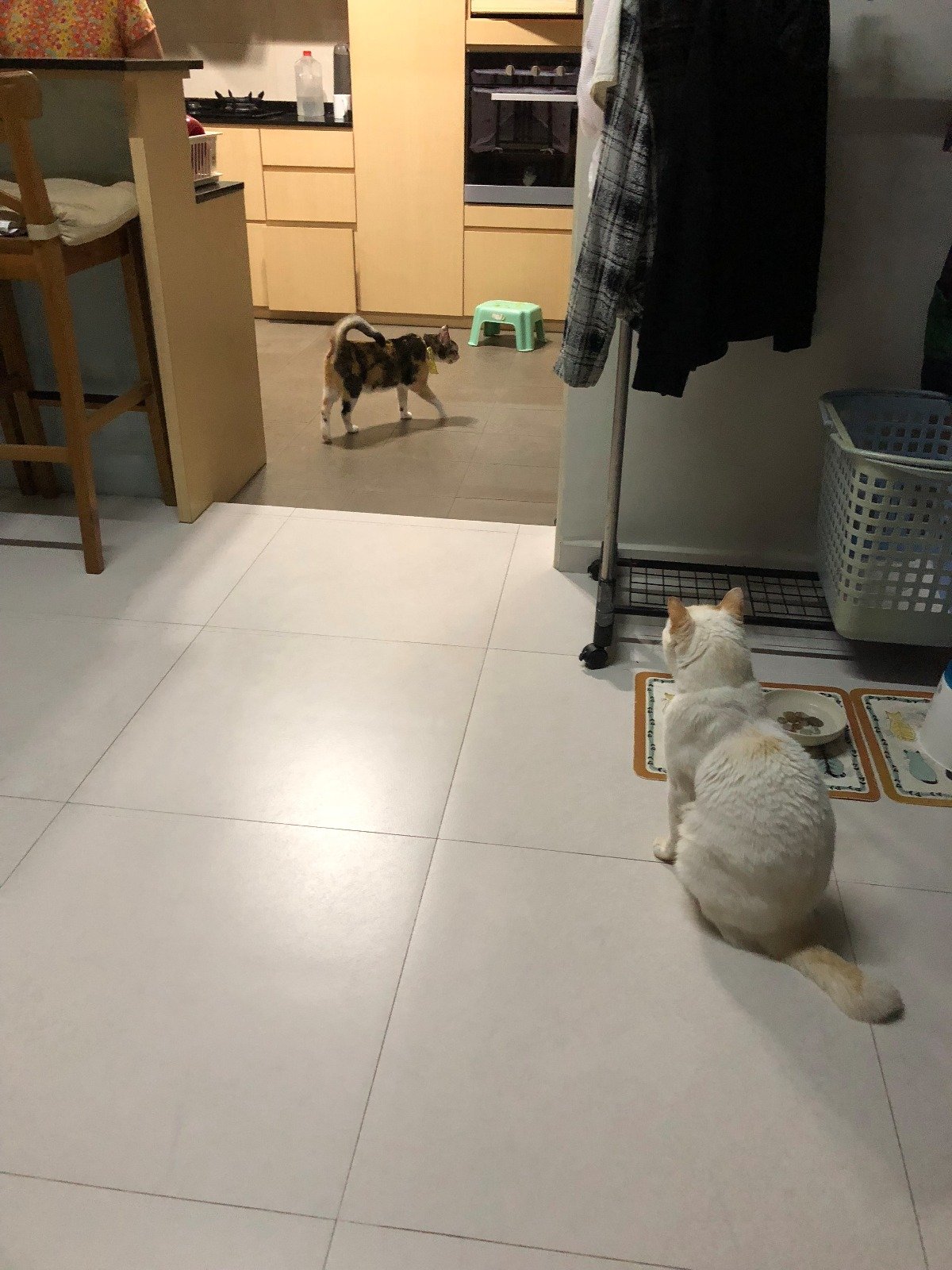 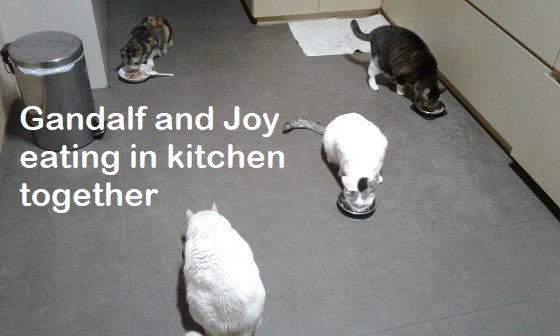 I have five cats, three of whom vie for the position of being the #1 cat in the house. Needless to say, they would attack each other, given half a chance. It certainly would be a lot easier to manage if the cats got along and so I sought the help of The Cat People.

Another reason for engaging The Cat People – one of our cats, Joy, is on a restricted diet. To avoid her eating the dry food of other cats, we normally keep her in the master bedroom. In recent years, however, she started pooing and peeing on the bed. On a hunch that she preferred to be in the living or dining areas with the other cats (and possibly lord it over them), we felt it was necessary to find a way to have the cats co-exist peacefully and reduce the associated “bombs” on my bed. I am quite sure it was a deliberate CALL-TO-ACTION attempt on her part. If I catch her about to do it and tell her off, she would head over to the litter box.

Helene Papillon was incredible. She asked us to start with two cats and allow them to be in the same area – we were wondering how we would get away with it, without flying fur and shedding blood… When Chestnut first came to us, he managed to slice off part of one of Gandalf’s toes – the bleeding took forever to stop. We had to bring Gandalf to a vet to manage the wound.

Helene brought a toy with her – with artful gestures, she managed to distract and redirect each cat if they came too close to one another – yet allowing them to co-exist in the same area. She gave us tips and pointers on how it was done and that we should try it ourselves.

Although we are not totally out of the woods in terms of getting the cats to fraternize due to lack of time, we did manage to achieve some startling headway, thanks to the expert instruction from Helene. We are attaching some photos/videos for illustration.

A big THANK YOU to The Cat People for making all these possible! 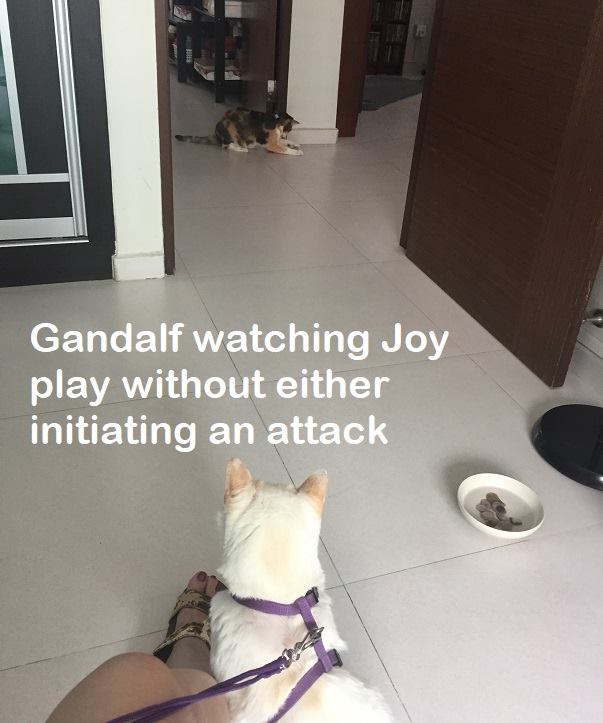 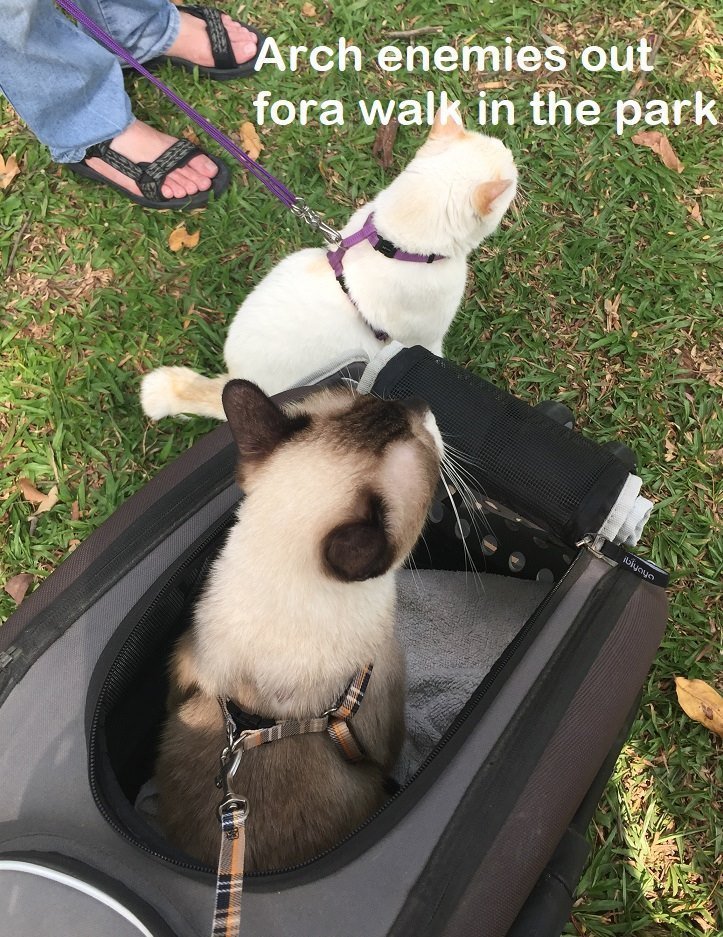 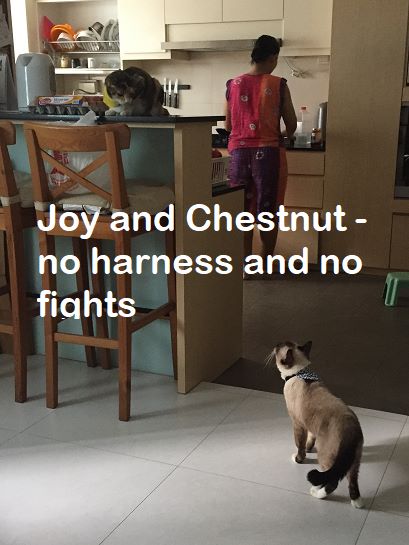 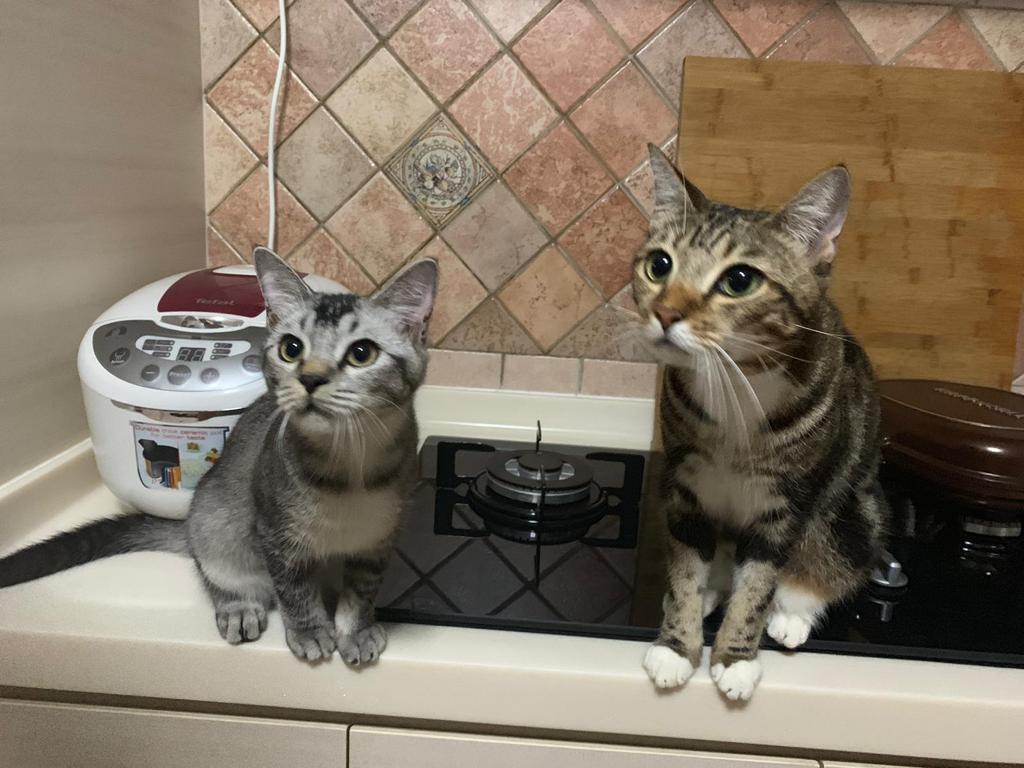 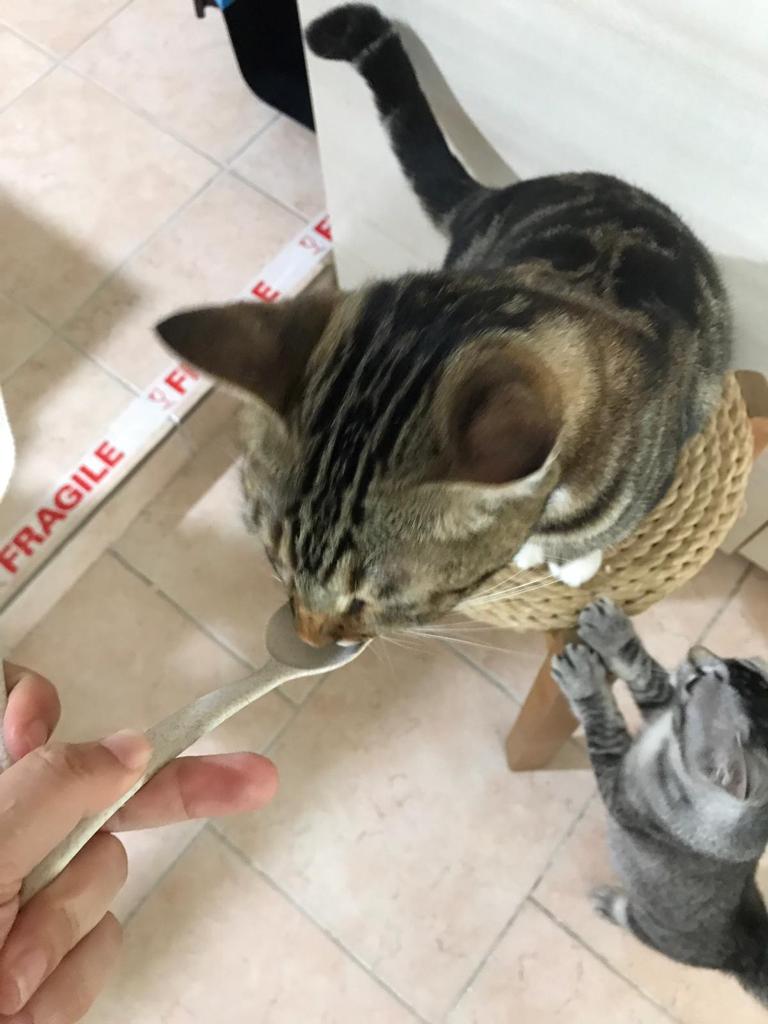 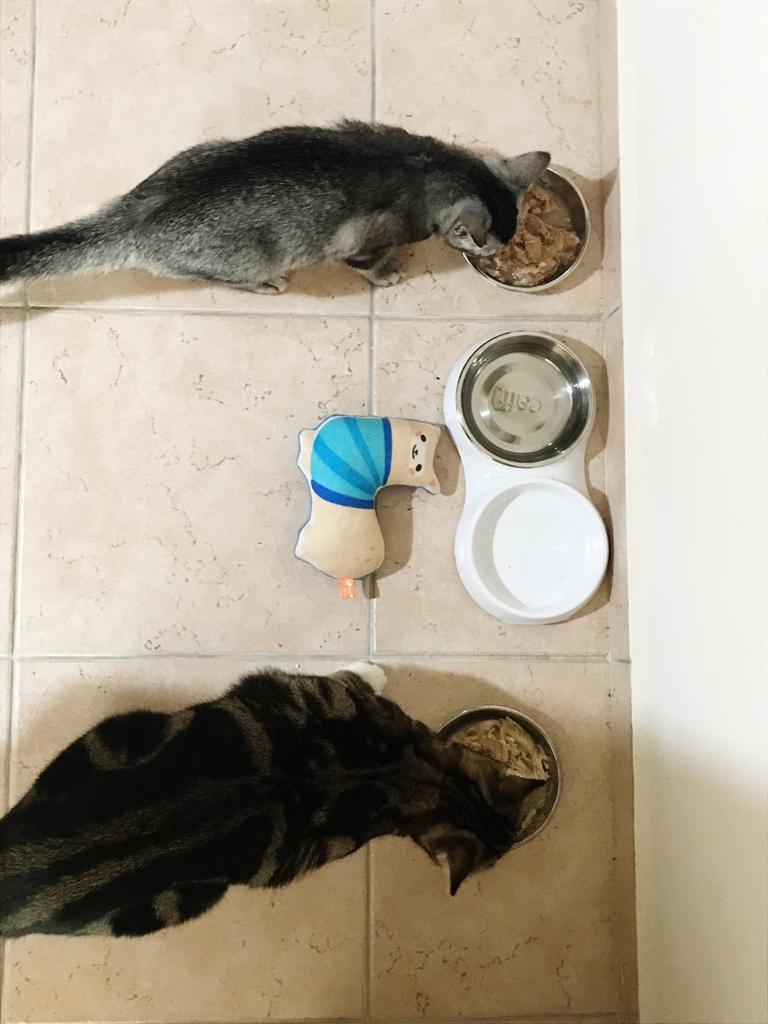 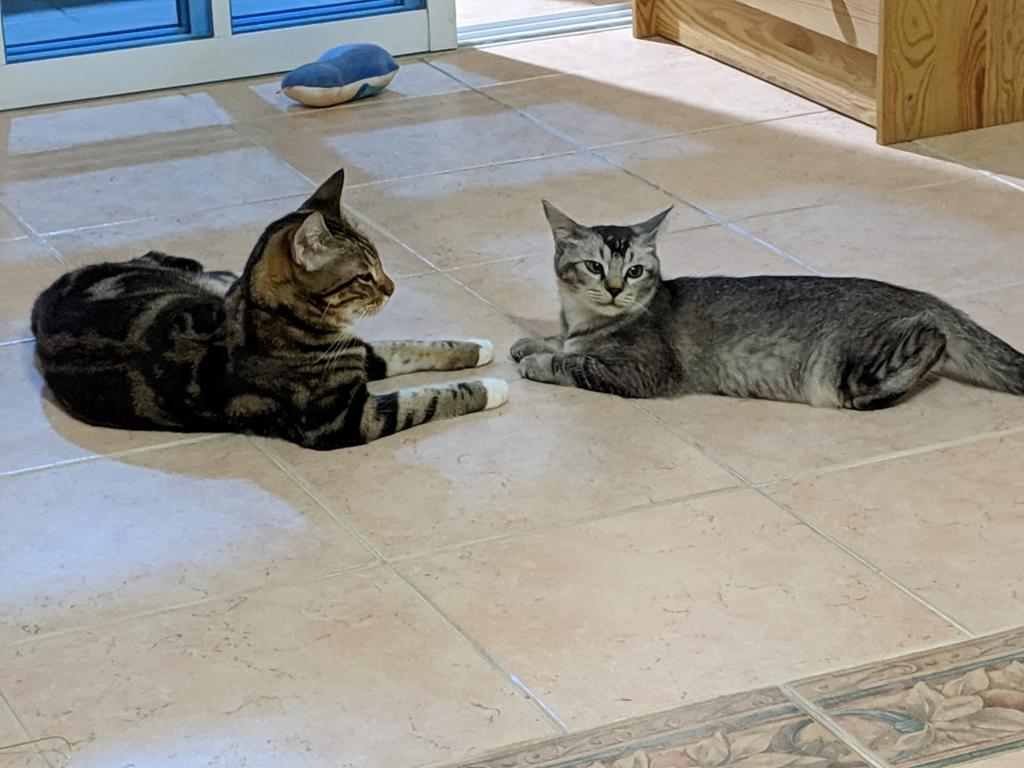 When my husband and I first adopted Katherine, a Bengal-ragamuffin mix (but as Helene can attest, she is probably 90% Bengal sans the liking for water -.-) in November 2017, we had no idea what we were in for as first-time cat owners.

Unfortunately, Katherine endured our failure to attend to her needs for closeness, openness and engagement (in the form of sufficient play) for a good nine months, by which time she had become very frustrated and anxious, resorting to biting hard and attacking us with scratching (we also didn’t know we had to cut her nails regularly).

It got to the point where we thought it was normal (although quite painful) to walk around with multiple scratch scars and swelling from bite wounds on our hands, forearms and lower limbs. Finally, in mid-September 2018, I decided we had to do something about Kat’s relentless (and increasing) attacks that seemed triggered by nothing in particular and found The Cat People from googling for cat behavioural consultants.

I reached out to them on Facebook and soon I set up a meeting with Helene, who visited us for the first time on 3 October 2018. After interviewing us over dinner and meeting Kat, she already had her first confrontation/staredown with our angry little girl.

That evening, she spent no less than four and a half hours with us—so dedicated was she to helping us understand what we needed to do for and with Kat that she ended up only leaving our house and getting home past midnight. She helped us understand her psyche, explained the problems Kat was facing and the trouble with how we had been interacting and shutting her out (of our room at night for instance), and how we were failing to give her enough intellectual stimulation and exposure through interaction. We learned that the toys we were using for her were all wrong too—small ones made her think our hands and feet were also appropriate prey and play targets—and because of the lack of attention (and also slightly too infrequent meals) we paid Kat, she resorted to chewing up plastic, paper, cardboard and even ingested a few of my own pills once around the house too (thankfully she seems to be Wolverine and hasn’t ever fallen sick or shown any issues from these strange aspects of her past diet).

And so we committed ourselves to dutifully obeying her instructions and doing the homework Helene assigned us—opening all our spaces to Kat, swapping out all our small toys to long ones with long strings and sticks for her to chase at a distance, eating with her at mealtimes so she can feel like she is a part of our lives and activities, even introducing calming pressure jackets and using pheromones and essential oils to help calm her down at home. We also started taking her out on evening walks once a week, to give her more engagement with the environment outside, and all these efforts showed cumulative results within the first three weeks of working on Helene’s instructions.

Throughout this time, Helene patiently responded to every question I had and every text I sent to her in panic when Kat didn’t respond to things in the way we hoped or expected. She even came over a second time to help us with some follow-up challenges we faced, teaching us how to put on her jacket, guiding us in teaching her new tricks to help her focus on a task and to feel engaged and involved with us, and would later on personally oversee installation of catification for our little home.

A couple months later saw us adopting our second kitten George — a mostly-grey domestic shorthair, who came to us, one of a National Day litter of four, at four months old in early December. And of course, Helene was there for us every step of the way, even assisting us in the adoption process—sussing out potential “candidates”, advising us on personality traits to look out for, even going the extra extra mile in helping to enquire on our behalf with rescuers and fosterers to assess a cat’s suitability before recommending them to us to meet them. After we adopted George, she didn’t stop there— she also taught us in great detail how to integrate George into the household, how to prepare a separate room for him, how long to keep them apart, what to do and look out for because he was sick at first, and how to carefully introduce them to each other so Kat wouldn’t feel threatened by him. She would review every video I sent her—through broken phone screens and a hectic house move on her end—through the year-end holidays and send me once-again immensely detailed text messages assessing the situation and giving me very helpful guidance, picking up signs in each cat’s behaviour in their interaction and alerting me to them and what they mean.

We believe we can now say Katherine and George are happy siblings who play together, eat together, sleep peacefully in respective spots during the day and share food at mealtimes. They did go through a period of rough play and some fighting—which Helene really guided us closely on as well, by the way—but with Helene’s mentorship, we were able to work with both to keep Kat calm and from “bullying” George a bit too excessively, and also give George the opportunity to stand up for himself too.

I can’t explain how grateful I am to Helene and The Cat People for all she and they have done for us and our kitties 🙂 George is still learning how to jump to the higher platforms on our catification but he is already enjoying it almost as comfortably as Kat :)) we love it all — and them both — as much as they do! 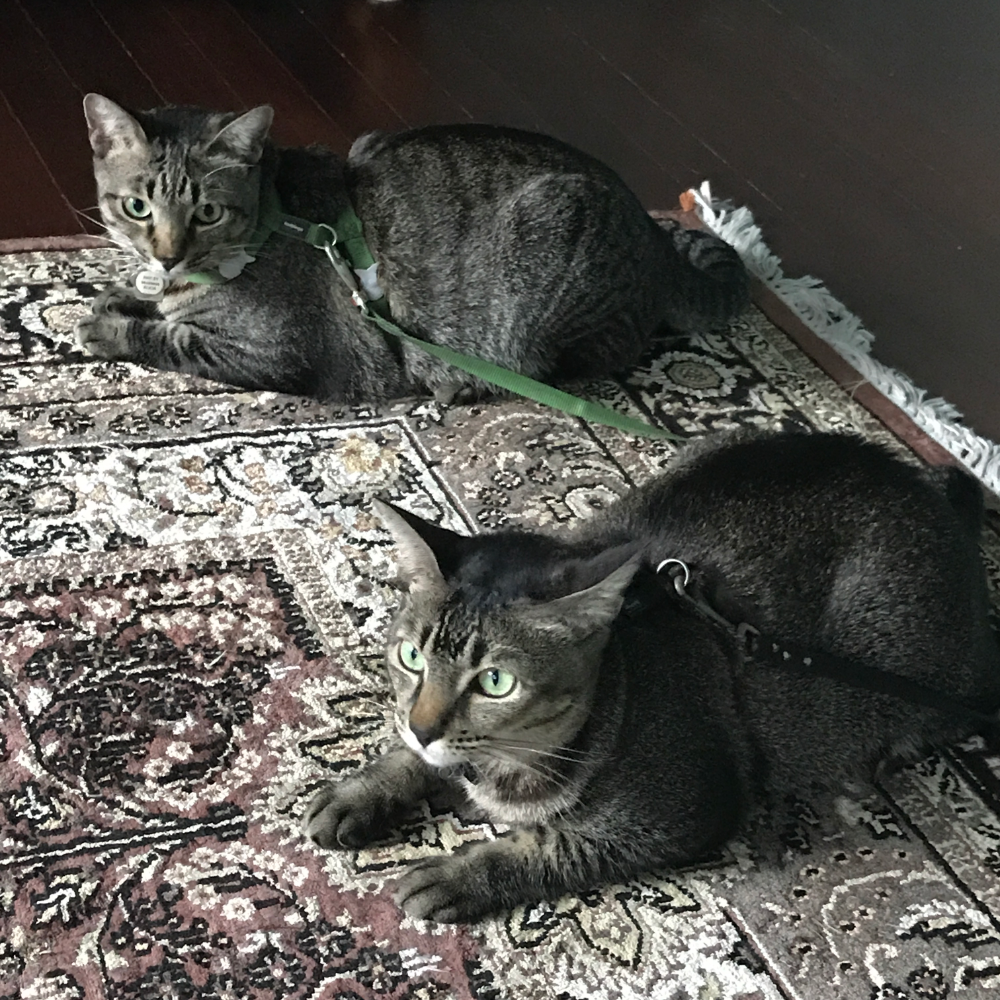 Helene Papillon has been instrumental in helping me set up a cat net system in a very large and open plan house. She is now helping me improve the confidence of an older cat with interactions with two younger adopted cat sisters. Very professional and experienced cat whisperer… 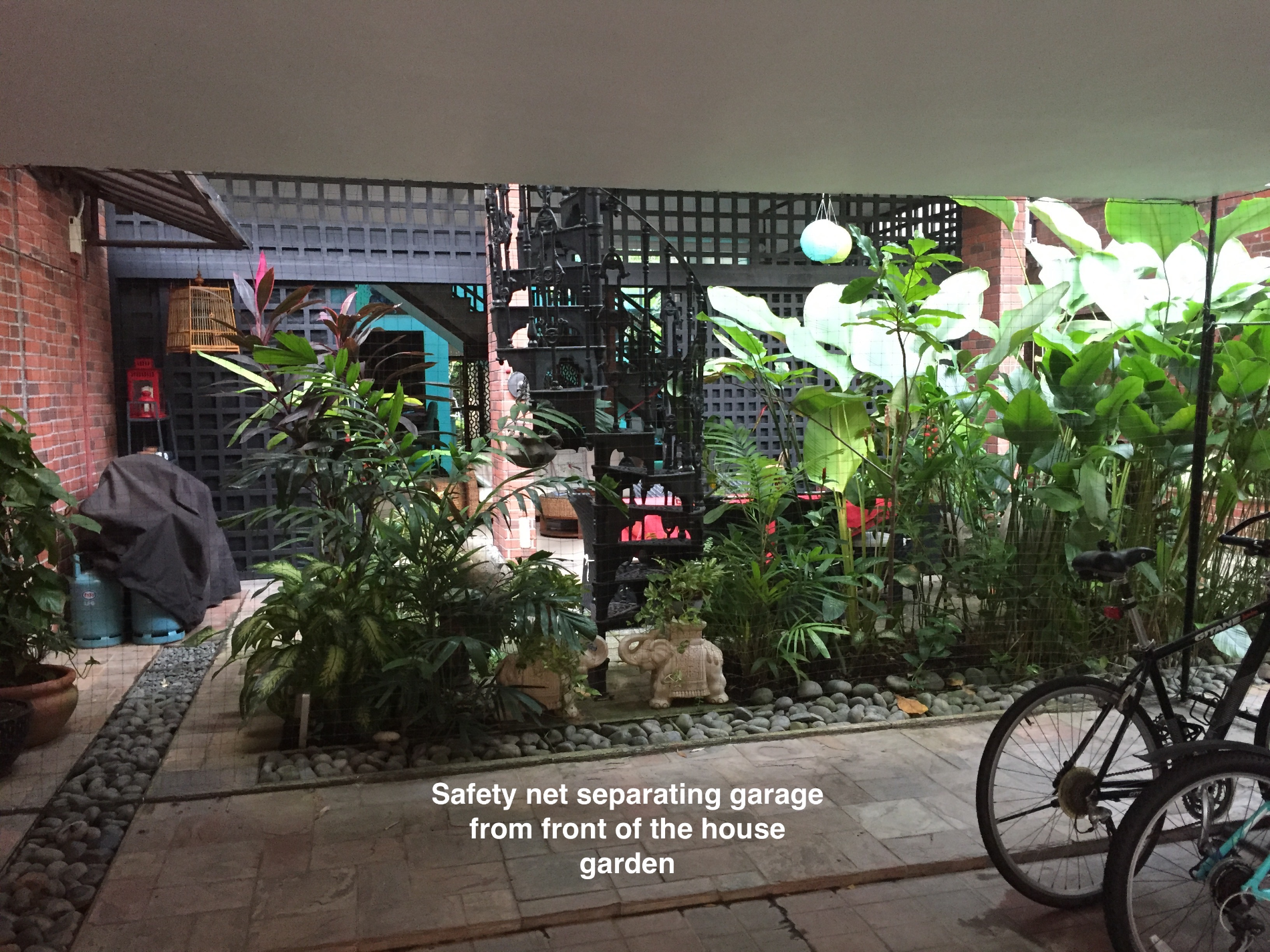 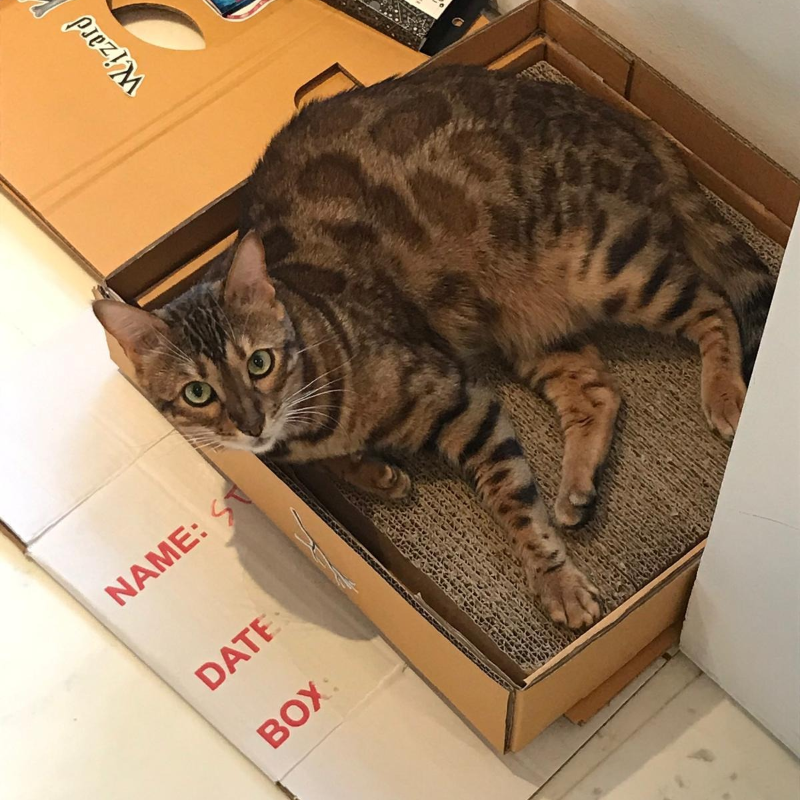 We have an almost 3 year old Bengal cat, who is a nervous squid most times and has been peeing outside his box, mostly into my bed in the past year. Thanks to (The Cat People)’s continuous help and support we have managed to keep our kitty a lot calmer and accidents are occurring less. (The Cat People) is always a whatsapp message away and keeps advising us. Thank you! 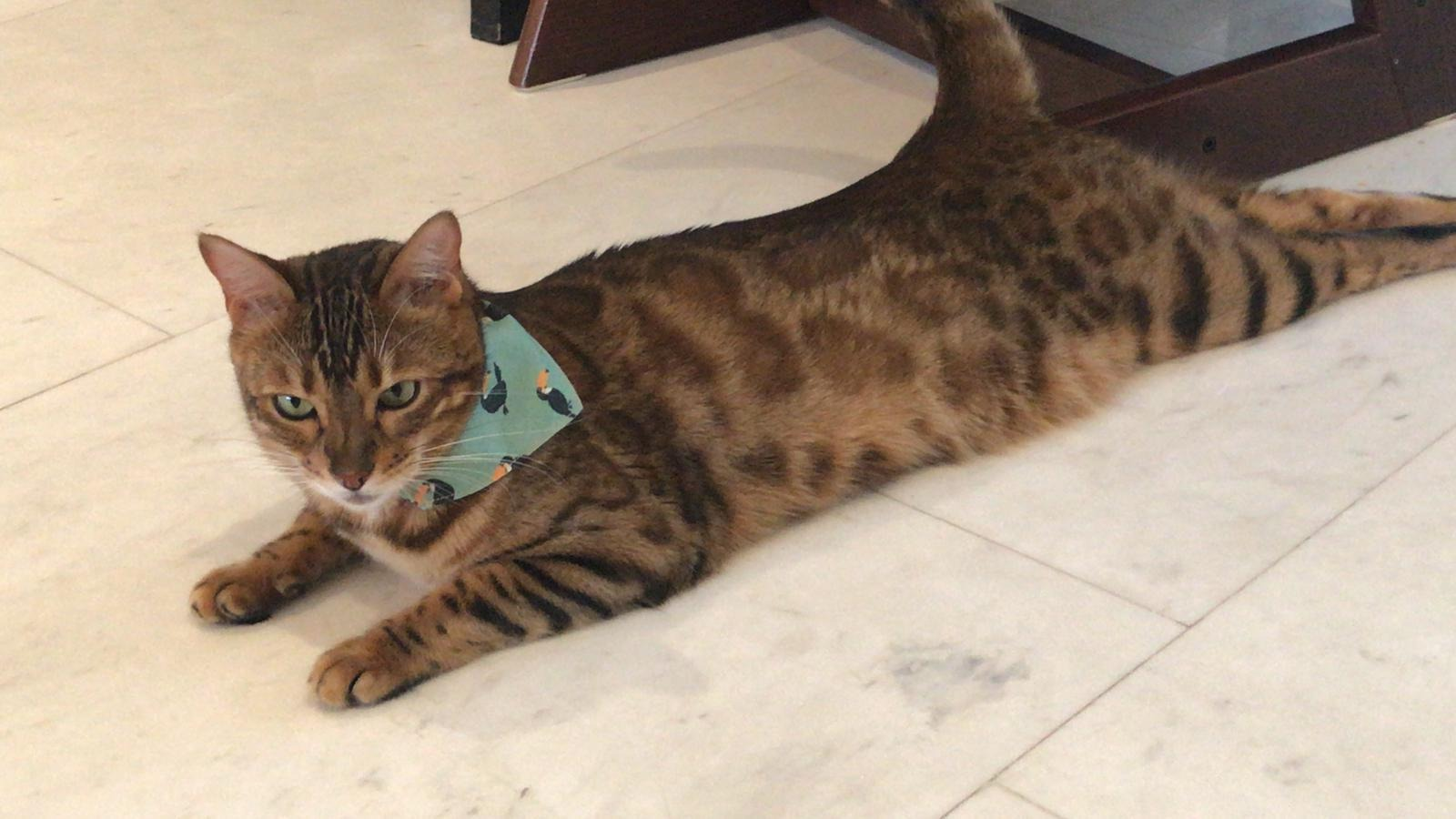 Head over to our social medias for the most recent projects testimonials from our clients.

Head over to our social medias for the most recent projects testimonials from our clients.

Tell us about your cats and how we can assist you in keeping them safe, entertained and happy in your home!
(Do include PHOTOS that you have that you think can help us help you better.)